The three breeds (Griffon Bruxellois, Griffon Belge and Petit Brabançon) are from a small hard haired dog called “Smousje” originated of near Brussels (Belgium).
In the 19th century, the blood supply of the Ruby King Charles Spaniel and Carlin, gave the black hair and short, and fixed the current breed type. These little dogs are very alert and were bred to guard carriages and buggies and maintain stables of rodents.
Today it is a small smart company dog, balanced, alert, proud, robust, square and powerful, very attached to his master, very vigilant but never shy or aggressive. It has good bones, but remains elegant in its paces and in its construction Its weight varies from 3.5 to 6 kg.
It is sporty but knows how to stay calm and has no health problems*.

The two Griffons are rough-haired with a beard, a mustache and eyebrows well and differ in color: the Brussels Griffon is Red, reddish (fawn) and the Belgian Griffon is black or black and tan; while the Small Brabant has short hair, rough coated and glossy, and the same colors as the Griffons of two varieties, with a dark mask.
The hair must be groomed (trimed) regularly (at least 2 times a year), in order to preserve the texture and general appearance of the dog.
The head is the part of the body the most characteristic and that is most striking, it is quite large compared to the body and has an almost human expression
The breed is undershot lower and the tip of the nose is raised towards the back, which in profile, square chin, nose and forehead on the same line.
Their eyes are wide apart, large and round, never prominent, and their ears are small, set high, semi-erected and fall forward.

Here is the portrait of the perfect small companion dog : unusual, original and easy-going !

Too much unknown and confidential, these three varieties, endangered, deserve to come out of the shadows and are not to be missed ! 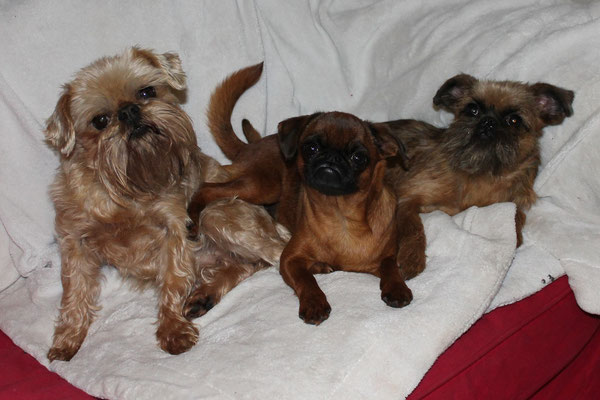 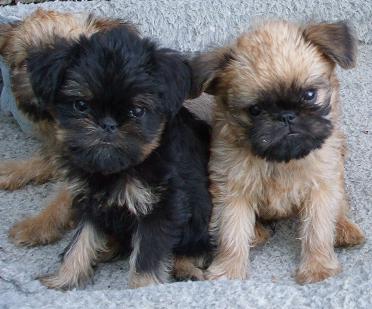 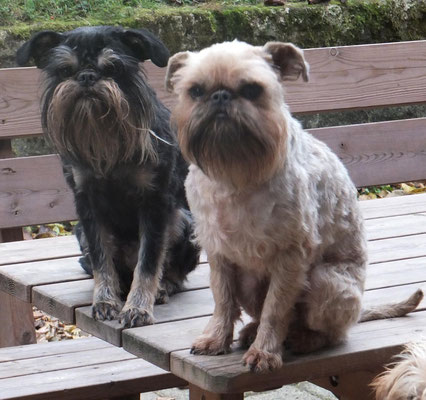 Most of the time the Brussels Griffons are very hardy & athletic dogs, with good longevity around 14 years.

It is very rare that a surgery is necessary to fix it.
We do not breed any Griffon with this problem.

There is a scheme giving the guidelines for breeding puppies with the most possible chances to be free.
In any case, it is already very difficult for me, breeder, to find good subject to breed with our dogs, but much more difficult to find some already tested by MRI! All breeding stock should be tested before being bred, and MRI screenings should be done after the age of 5 years to be absolutely reliable …
This is not an easy goal, especially since these screenings are recent and the history of the ancestors lines remain unknown.

So I will do my best, to reproduce naturally with dogs /bitches asymptomatic (always) and detected with MRI when I can do it (age of the dog / finances of the breeder).

I study the best bloodlines and pedigrees of the breed and I try to carefully select my dogs, including their overall and cranial morphology. I will constantly keep informed and remain vigilant about these diseases.
Anyway, to each range, all available information on parents will be given.